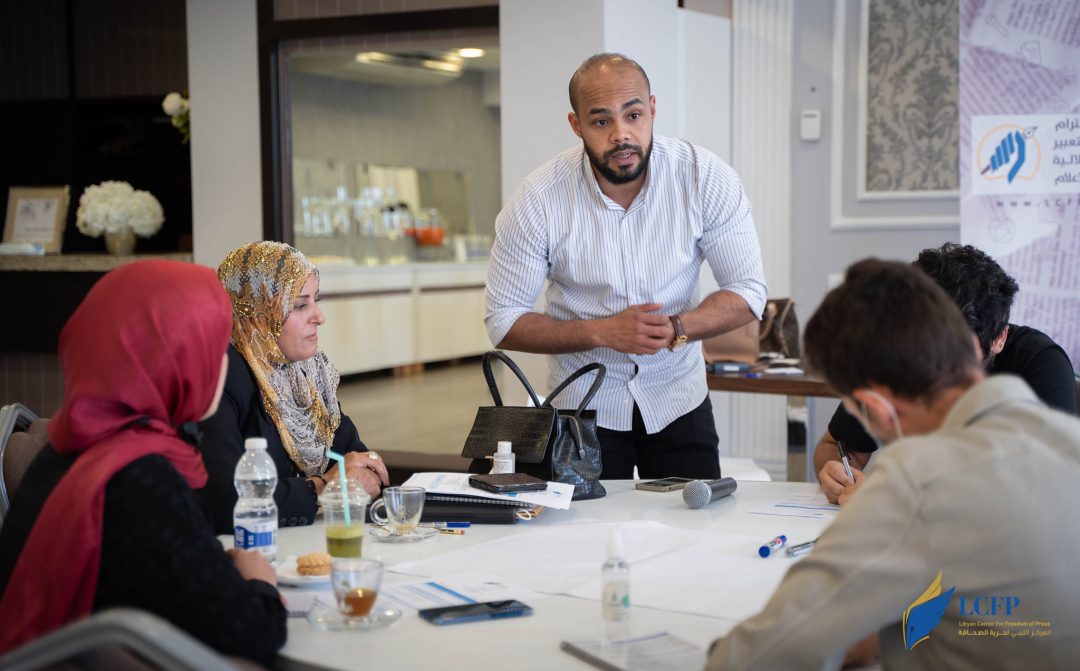 2022 has been a quick year. We are on the verge of the new year 2023, and about to celebrate our tenth year at the Libyan Center for Freedom of Press. However, there are still many actions and missions that must be done to move forward along with a team that is betting on success and making impact. We work in an environment characterized by difficult challenges and increasing professional pressures on all of us, especially those working in Libyan civil society in the light of the fragility of the legal system and the increasing security risks and their complexity

Perhaps the most prominent feature of the past year is the significant shrinkage in the space for civil society work due to the arbitrary measures taken by the Commission of Civil Society in the east and west. 2022 has also witnessed our resilience and steadfast rejection of many decisions of the Government of National Unity. The GNU describes those decisions as reformist while we consider them as selective and vindictive

During the year 2022, we focused on the internal development of our institution. We have endeavoured to modernize its policies and administrative and executive structure. We have also focussed on fine-tuning our vision in supporting freedom of expression, conducting real and radical reforms to strengthen the independence of the Libyan press and the media sector. We have been pushing forward to promote the economic and social rights of journalists who continue to face exceptional critical circumstances that impose strict censorship on their work

Our ongoing efforts to combat hate speech and disinformation, which have been launched since 2017, may still find wide national interaction and resonance. These efforts have culminated in a painstaking and more professional work on Falso platform to monitor hate speech and fake news.

2022 was a year filled with discussions, orientation sessions, and round tables of dialogue that targeted several segments of Libyan society, such as academics, human rights defenders, judges, prosecutors, lawyers, leaders of political parties, and candidates for the stalled presidential and parliamentary elections along with journalists and fact-checkers. It all aimed at drawing the features of national vision to serve as the basis of a new national legislation that sets the path for a new era for media related freedoms and creates a break with the vulsive guided media discourse and the state of fragmentation

We believe that open dialogue on a common ground has enabled us to have live and direct discussions with 250 Libyans from several segments of the Libyan society, in 8 major Libyan cities

Many of the GNU decisions are efforts to control and orient the public and private media. Government Decision No. 811 of 2022 to regulate radio and television broadcasting best illustrates this as media lacks the most basic elements of “independence and pluralism”. The decision prompted us to go to the Administrative Department of the Court of Appeal to challenge the decision. Our Appeal is based on the illegality of the government’s decision as it contradicts with Libya’s obligations to international agreements and with the constitutional declaration in the country. Indeed, the government is trying to impose exorbitant fees without any services provided in a vindictive and selective manner of handling licensing and broadcasting

Over the past year, our team has produced several visual and audio materials, press releases and statements, within the framework of expanding and involving the broad and general public in our work and programs. This helps us in terms of opening up and building a bridge for communication with the general public

Finally, 2022 remains the year of security risks within the context of fragility of the legal framework of our work and efforts, as well as the continuous professional pressure. Yet, we will inevitably overcome all obstacles

← Refugees: Forgotten even in death